Published January 7, 2009 by The Gateway Pundit

A Turkish mob forced Israeli basketball players to flee the court today.
Here is the video…
It was not a protest. It was a riot:

They even burned the Israeli flag. 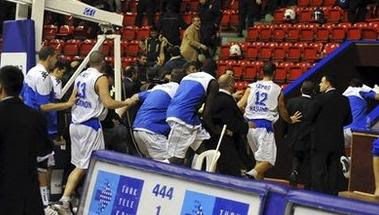 Players of Israel’s Bnei Hasharon run from the arena at the beginning of their ULEB Eurocup Group D basketball game against Turk Telekom in Ankara, Turkey, Tuesday, Jan. 6, 2009. The Israeli basketball team fled to the changing room Tuesday as hundreds of fist-pumping, chanting Turkish fans protested the violence in Gaza. The European Cup game between Bnei Hasharon and Turk Telekom was later postponed because the Israeli team did not return to the court. There was no word on when or where the game would be played. (AP)

Players from Israel’s Bnei Hasharon basketball team were forced to flee the court today in Turkey after protesters chanted and hurled lighters and coins at them.
The Turkish team was awarded the victory after Bnei Hasharon was considered to have forfeited the game.
ABC News reported:

A Eurocup basketball match was called off in Ankara as the visiting Israeli side did not bother to return to the court after Turkish spectators launched anti-Israeli protests, prompting riot police to intervene.

“Israeli murderers, get out of Palestine,” “Allah-u Akhbar” (God is great), the protestors chanted as the teams – Israel’s Bnei Hasharon and Turkey’s Turk Telekom – initially came out for the match in the Ataturk Sports Arena.

The Israelis returned to their locker room after a group of protestors, some carrying Palestinian flags and wearing the kaffiyeh – the traditional checkered Arab scarf – hurled coins and lighters at them and attempted to invade the court, prompting police to use truncheons to stop them.

The spectators were then asked to empty the hall, but several dozen people refused to leave and their exit was secured only with a false announcement that the match had been cancelled.

The referees then called the two teams back to start the game, but the Israeli side did not show up.

Turk Telecom, leaders in Group D, is expected to be awarded victory, with Bnei Hasharon, stuck at the bottom, considered to have forfeited the game by not fielding a team.