Published November 14, 2006 by The Gateway Pundit

Any bets that the newly elected Senate Majority Leader Harry Reid is one of the democrats discussed in the latest Abramofff testimony? 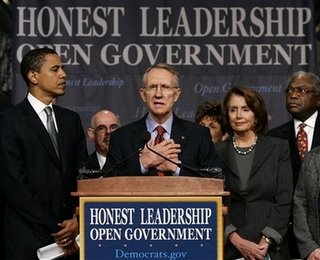 Clutching his hands to his heart Senate Democratic leader Harry Reid, D-Nev., (lays it on thick) calls for Republicans, to clean up the tainted relationship between lawmakers and lobbyists in the wake of the scandal involving former lobbyist Jack Abramoff at the Library of Congress in Washington Jan. 18, 2006. (AP)

– According to rules, The Library of Congress, where the democrats held the above press conference, is off limits for political events. Oops.-

In January the Washington Times reported that three Republicans and two democrats including Senate Minority Leader Harry Reid (D-Nev) and Senator Byron Dorgan (D-ND), Vice Chairman Of The Senate Panel Currently who investigated lobbyist Jack Abramoff, were named in the first group of politicians to be investigated in the Abramoff scandal.

Here is a list of the politicians with contacts to Abramoff.
40 of the current 45 democratic senators took Abramoff money.

The Blotter is reporting on the latest developments from the Abramoff scandal:

Sources close to the investigation say Abramoff has provided information on his dealings with and campaign contributions and gifts to “dozens of members of Congress and staff,” including what Abramoff has reportedly described as “six to eight seriously corrupt Democratic senators.”

The sources say Abramoff was about to provide information about Bush administration officials, including Karl Rove, “accepting things of value” from Abramoff.

Abramoff has been meeting almost daily in secret locations around Washington with Justice Department investigators who are examining thousands of e-mails and documents, according to sources close to the investigation. The convicted lobbyist was spotted in downtown Washington, D.C., yesterday, carrying a computer laptop case.

But the prosecutors’ easy access to Abramoff has now ended.

After granting several delays, the federal judge in Florida, who sentenced Abramoff to six years for fraud in a casino boat gambling scheme, has ordered him to report to prison tomorrow.

Guess who appointed this judge?